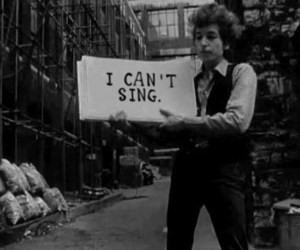 Now that Bob Dylan’s received the 2016 Nobel Prize in Literature who better to teach us about writing?

Why Mr. Dylan? Consider the following:

All the official how-to-write-online blogs tell you to write in a voice that’s authentically yours – while also being utterly unique and completely captivating – if you have any hope of breaking through the noise online.

But what if you find your writing voice somewhat uncaptivating? Or, what if you don’t even know what your voice is? What if – like many of my health practitioner clients and students – “your voice” was long ago pounded out of you in school, replaced with a mannered, dry, often academic style only another academic could love?

So, who better to teach us about developing a unique voice than one of the most controversial and singular lyricists and musicians of our generation, Bob Dylan.

After all, Dylan’s succeeded despite his voice, some would say. Remember the first time you heard Bob Dylan sing? Isn’t his unmistakable voice the first impression most of us have of him? When I first heard Dylan on the radio in the early 70’s, I was so focused on that gravelly whine; I didn’t listen to his lyrics or the music at all.

Some people loved his voice. Novelist Joyce Carol Oates described Dylan’s voice as “. . . Frankly nasal, as if sandpaper could sing.” This from someone who liked him.

Decades later, several Bob Dylan albums are among my most listened-to. His relentless musicianship and lyrical brilliance won me over.

Endless discussions about what makes Dylan a Legend fill the online fan forums:

Now the fanboys and girls will no longer have anything to discuss, as the Nobel Prize Academy has settled this argument once and for all. Clearly, it’s Dylan’s lyrics that set him apart as an artist.

Like any artist, I think it’s a combination of all the above that gives Bob Dylan a voice, unlike any other musician.

Let’s take a look at Mr. Dylan’s path to that Nobel Prize for some clues on finding – and embracing – your creative voice.

1. Don’t Worry About Your Voice at First – Focus on Your Message

I don’t know if Bob Dylan was ever concerned about his singing voice. A lot of people around him certainly were. When a producer named Hammond signed Dylan to Columbia Records, staffers at Columbia called it “Hammond’s Folly,” because they found Dylan’s voice so jarring.

But, even after his first album flopped, Dylan didn’t worry. He had something to say, and he focused on his message. And his lyrics reached a lot of people before his voice did, sometimes through the voices of other, far more famous singers.

Want to be a better writer? First, have something to say. Develop your point of view, mission, vision, a manifesto. Pinpointing what or whom you disagree with, and identifying to what you react are the clearest paths to clarifying your point of view.

With what or with whom do you disagree? Dylan’s strongest and most memorable early songs were a reaction to and a reflection on the civil rights movement and the war swirling through the 60’s. And Dylan ticked a lot of people off.

To what do you react with the most passion? On which topics are you willing to take a stand? I find that when I passionately care about something, and can’t wait to write about it, all of the mannered, academic bad habits that were pounded into me in college magically start evaporating. I write through them – and my voice begins to emerge.

Dylan is the voice of a generation because although many of his songs were deeply personal, they were also reflections of the culture. Dylan was expressing in poetry what a lot of other people were feeling but had no words. He spoke for them.

So when thinking about what you want to write about, answer this question: Can you frame your topic within a larger framework, something other people may care about, as well? Tap into that angst or frustration – offer some valuable solutions — and you’re on your way to writing with a voice that connects.

3. Read People Whose Voice and Message Resonate For You

Dylan’s first album consisted mostly of covers of traditional folk songs from folk artists who had influenced him.

Read your favorite blogs with a writer’s eye: Look for the elements that draw you in, and the topics that leave you cold – and ask yourself why. What we’re all after when we write is to communicate: to reach and inspire others, to be memorable, and if we’re fortunate, to make a difference.

So, if someone you read draws you in and inspires, motivates, or even angers you – step back become aware of what resonates with you.

4. Sometimes “Trying on a Voice” Helps You Find Your Own

Dylan loved folk singer Woody Guthrie so much, on his first album, he attempted to mimic Guthrie’s voice. But it wasn’t until he embraced his voice that his career took off.

The stories of famous authors who’ve copied the entire works of their literary idols by hand to learn the rhythm and cadence of their writing are plentiful. I know of at least one doctor who did exactly that: he wrote out by hand a few of his favorite blog writer’s posts word for word, and then re-wrote each paragraph from his point of view, which quickly taught him what he most needed to know about the structure and the elements of an excellent post.

It’s probably not advisable, however, to practice in this way in front of your online audience.

Ever clicked through to someone’s YouTube page, and the speaker is channeling some late night TV pitchman? Somehow, you just know he hasn’t figured himself out yet. He makes us uncomfortable. We don’t care if he claims to have the cure for cancer, we click away. People who are uncertain about their message, or who are uncomfortable with themselves, make the rest of us feel uncomfortable. And we won’t read or listen to them.

You don’t have to put on a voice. Even if you think the super-blogger you enjoy is witty, or uber-intelligent, don’t attempt to channel him. Use your voice, the one you have now.

Dylan’s first album was a huge disappointment. And no wonder, Bob Dylan’s voice was nowhere to be found on that record. When interviewed much later, Dylan stated that he was hesitant to reveal too much of himself at first.

I find this to be a barrier for many of my clients: they think they must write articles that look and sound just like those practitioners they read and admire. Churning out “safe” esoteric or academic articles – just like those you wrote in school – are really another way of hiding. And if you’re trying to hide behind a façade or pretension, it will be even more difficult to write with your voice. And when people do find your content, the chances are greater they’ll move on without making a connection. For all those readers you fear you’d drive away “if they only knew the real you,” there are an equal or greater number of people eager to get to know the “real” you.

Don’t be afraid to step up, tell your story, share your point of view, and let the chips (or readers) fall where they may.

6. Remember: There’s Room for Your Voice, Too

While my 70’s bedroom turntable was spinning Dylan’s Blonde on Blonde and Joni Mitchell’s Blue, on the living room stereo/TV combo, my parents were playing records by a girl from the Southern California suburbs by the name of Karen Carpenter. Remember the Carpenters?

Bob Dylan was the anti-Carpenter. His message was about breaking open while Karen’s was about the safe cocoon. Dylan’s voice was rough-hewn where Karen’s was silky smooth. And, in our 70’s home, both voices happily coexisted.

The point is, today both The Carpenters and Bob Dylan have devoted cult-like followings. And so does Barry Manilow. Proof positive: All genuinely unique voices have a place.

7. No Matter What, Just Keep Writing

Dylan’s written close to 1,000 songs, some say – and he continues to write – long after songs and albums of his have become legendary, he keeps writing. Some would say this is the real secret to “finding” your own voice — write so much that eventually, you burn through anything that isn’t authentically you.

8. You’ve Got Plenty of Time

While I hope a few of these pointers have proven helpful, when it comes to developing your voice as a writer, there is no rush. While you’re building an audience, few will find you because of your voice — unless you sing like Sinatra or write like Mark Helprin.

And even Sinatra and Helprin must continue to do what we are all called to do: communicate regularly with those who most need and seek out their art. After all, even though he possesses The Voice, it’s Sinatra’s lyrics, songs, and the potent emotional message that bring the audience back, again and again.

Do the same, and by the time your own body of Authority Content and Audience are growing, your voice will have naturally emerged.

You have a tribe of your own, just waiting for you to begin sharing your message. So, don’t listen to the naysayers (including the one in your head) telling you that you shouldn’t begin. Start writing in your voice – however uncertain you may be – focusing on your genuine, passionate, and universal message. Write naturally, and consistently, and your fans will find you. (And maybe that Nobel Prize won’t be too far behind.)