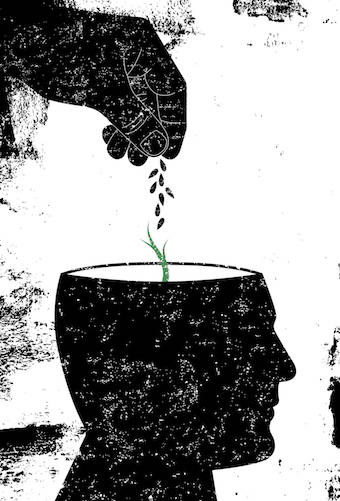 “There is only one moment in which you can experience anything, and that is now, yet a great deal of time is thrown away by dwelling on past or future experiences. Turning your now into total fulfillment is the touchstone of effective living, and virtually all self-defeating behaviors (erroneous zones) are efforts at living in a moment other than the current one.”

I still have my original dog-eared hardback of Dr. Dyer’s Your Erroneous Zones because that book had such an impact on me as a kid. Dr. Dyer expertly blended the pragmatic approach of his work as a therapist with that of the burgeoning “New Thought” movement of the 70’s. Wayne Dyer made what was then considered the “New Age” safe for a lot of people.

I mention this book and quote because it illustrates something profound: note how clearly he writes, how easily we understand what to some was an esoteric spiritual principle. Dr. Dyer’s writing changed the course of my young life. In fact, Dr Dyer was once one of my favorite authors. Yet, somewhere around his sixth book or so, he began leaving me behind as a reader.

What Happened to Dr. Dyer?

With each book, the language Dr. Dyer adopted became increasingly abstract, esoteric, and unmoored from the language many people used. He began sounding more like the writers he was reading and admiring, and less like his former pragmatic, grounded self. This was to be expected, after all, he was evolving — and maybe I just wasn’t.

Consider this passage from one of Dr Dyer’s later books:

I was feeling them in my body, living their messages as if they were me, assuming the feeling of the wish to know their truths as already fulfilled. And when you are able to feel whatever it is that you wish to have or become, you become it and it becomes you.

What?!? I am not doubting Dr. Dyer’s sincerity or passion when writing the above paragraph. Yet, using abstract language is a lot like mumbling when speaking. It may be vaguely soothing, yet ultimately communicates nothing to anyone other than the already deeply initiated.

Now, I’m familiar enough with the literature to translate the above paragraph, yet do you think there was a way he could have written it that would have had a better chance of reaching those people who most needed this message? After all, if you’re only writing to the already initiated, you’re preaching to the choir. You’re not changing minds and lives. And, isn’t that the point?

How and Why Doctors Lose Touch With Their Audiences

My physician clients are relentlessly open, curious, and hungry for new knowledge and experiences. And they’ll eagerly push forward into these new frontiers, recording their discoveries for all to read. Dr. Dyer began writing about his increasingly esoteric experiences on the spiritual frontiers. I’m sure, like any writer, he wanted to bring his readers along with him.

But while Dr. Dyer was meditating in Hindustani ashrams with his spiritual mentors, his readers were back home riding the subway, trying to make it through another day in a job they barely tolerated, burdened by the stack of bills waiting for them at home, with the aches and pains of a body changing in ways they didn’t fully understand.

These are the readers Dr Dyer may have wanted to reach and touch — those with the most fragile of beginner’s minds — and yet Dr. Dyer was writing from the expert’s mind.

Your First Task is Communicating from The Beginner’s Mind

Let’s stipulate that I just wasn’t Dr. Dyer’s intended audience any longer. I have to assume he attracted a whole new audience — readers who resonated with what I found to be high-minded esoteric abstractions.

Maybe I’m being unfair — especially since Dr. Dyer’s no longer around to ask. It could be that Dr. Dyer was very intentional in his choice of language and audience. I mean, don’t we all attract the audience who naturally resonates with our work? Shouldn’t we just write from the heart and let the chips fall where they may?

If you want to write books that only your best friends read and you genuinely don’t care if your message gains any traction or changes minds and lives, then be my guest. However, if you feel compelled to make a difference, have an impact, and leave a legacy, you must communicate with the beginner’s mind.

How do Experts Return to that Beginner’s Mind?

Writing from and for the beginner’s mind is difficult when you’ve moved so far past it yourself. The key to achieving this kind of mastery in your writing may be in paying closer attention to those patients and clients in front of you every day.

Think about the new patient who comes to see you. This person is starting anew, has a lot to learn — he is a beginner in understanding his body and how health is created and nurtured. In order to relate to this patient and help him, you’ll need to temporarily set aside your current esoteric and academic reading and go back to the beginning: frame the decisions and choices and treatment protocols in ways he can understand and accept and act upon.

These Are Also Your Most Avid Readers . . .

Now think of the middle-aged Google searcher in Topeka who is experiencing unfamiliar pains her doctor writes off as stress. This beginner — and millions like her — is searching for answers, and will resonate with that practitioner who cares enough to write clearly and plainly.

Making the effort to communicate with simple clarity is one of the greatest acts of compassion and love available to us as healers. It is a way to offer a hand to the beginner and say, “I get you. I once was you. Let me help you on your journey, no matter where you’re starting from.”

Here’s what I know, after a decade of reading emails and blog comments from my client’s readers: Your audiences are starved for thought leaders willing to step off their esoteric and academic high-horses and speak to them, help them understand the steps to health without talking down to them.

Communicating clearly and successfully to both the beginners as well as the experts is one of your most important callings as healers. And if you want to reach, impact, and influence a larger audience, communicating clearly with a “beginner’s mind” is your primary responsibility.

In the quote that opens this article, Dr. Dyer himself describes the challenge as well as the opportunity present in writing from the beginner’s mind. In that quote, he writes about living fully in the present moment, which is certainly good advice. When writing for your audience, however, you have to make the effort — the sacrifice, really — to develop the skill of returning your attention to how you used to be, in the past — your own beginning. If you allow yourself forget how that feels, you lose touch with those people who most need you now.

This may be difficult, and if so, then shift your perspective to your reader’s perspective, to their “present moment,” the realities of their fears, pains, confusions, and hopes right now.

This is why I’m so pleased when new practitioners take my EvergreenAudience course — this point in their career is absolutely the best time to detail every step of their own journey, while they themselves are living from the beginner’s mind. If you’re just starting out, keep a journal of your discoveries along the path, your ah-ha moments with patients, your interactions with your teachers and peers. You will find these notes very valuable to your future writing, and you will find it helps you connect with your readers in an intensely personal way.

Today, listen actively to your patients and clients, take notes when they ask you questions, note how you responded, and how they acted (or didn’t) on your recommendations. And then, when writing for your site, write as if you’re speaking with a patient, with the same objectives.

Are you willing to take this challenge? If you are, a huge, largely untapped audience is waiting for you.