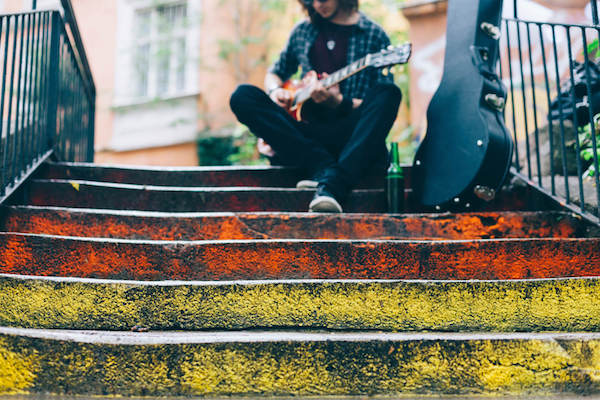 Not long ago I found myself in a downtown new to me, wandering the early morning streets looking for the nearest Starbucks. After taking a shortcut through a park tunnel, I emerged to find myself looking up a short flight of stairs with a street busker seated at the top, softly strumming his guitar.

I planned on doing what they teach in Big City 101: drop my eyes while dropping some change in his cup as I rushed past him, thinking that would be the end of it.

But busker street kid had other plans.

As I neared the top of the stairs, I first heard spa-like sounds coming from a boombox as the stench of cheap incense assaulted my nostrils.

“Dude!” said street kid, jumping to his feet and bowing in my direction. “How do you like this street ambiance?”

He’d lit several incense sticks and planted them in the well-maintained city earth of the concrete planter behind him. Electronic strings swelled from a battered boom box. My coffee-deprived brain cells struggled to take it all in.

“Please have a seat.” He said, bowing and gesturing toward the stone bench.

I had to see what else he had planned. So I sat.

“Which music would you prefer?” he asked. “I bet you’d like something mellow, am I right?” And with a flourish, he spun the dial to a local 70s pop station. Olivia Newton-John bounced off the stone face of the bank building behind us.

About now I’m craving Starbucks’ cozy coffee-infused chambers and wifi signal. Sensing he was losing me, it was time for his big close.

“How much is all this worth to you, dude? The park lies behind you, the city before you. A quarter for a moment or a dollar to linger longer?”

Yes, he did say, “linger longer.” How could I not leave him with a buck, for his creativity alone?

“Thank you, kind sir for enjoying my street spa today. See you soon?”

Later, I realized my street encounter contained a few valuable website marketing nuggets for us all.

Our street kid created his little haven in the city, complete with sights and sounds. They haven’t yet invented scratch-n-sniff websites yet, so online, it’s all about encouraging someone to stop by your site and stay at least long enough to connect.

And once they’ve stopped by to skim your content, what kind of experience do you have for them to savor? Words? Images? Sound? Sight?

That video you recorded – the one about the thyroid – is that fascinating enough to encourage an opt-in? If not, what else could you test to draw the kind of reaction you seek?

2. Encourage a Yes Within the First Few Seconds.

My street friend encouraged several “yes” responses from me before ever asking for money:
— He asked if I liked his incense infused ambiance. A yes from me.
— He invited me to sit, which I did.
— He asked me if I liked his music, another yes.
— I then agreed that it was a beautiful morning for relaxation.

Four yeses in a row. Then, he asked for the “donation.”

And on your website, that’s your job, too — not an immediate sale, but a subscriber opt-in. If someone has found your site, you presumably have something they’re searching for. And now, the clock is ticking: You have seconds to engage and connect before they click away.

Getting to that “yes” quickly is all the more important when you remember that most of the time, your visitor may believe they’re on their way to another destination on the web.

I was on my way to find coffee — and the street kid could have offered back rubs and a sauna and I still would have wanted Starbucks. Likewise, a post on your site may have come up in a search with a dozen others. That searcher may be stopping by for literally a few seconds and their quick scan of your content may not be quite what they thought they were looking for.

Encourage them to respond with a “yes” the moment they arrive. In your subscriber opt-in box, ask a question relevant to your audience, or make an offer that your target market just can’t turn down.

3. Own Your Space Online.

An hour later, returning from Starbucks, my street friend was no longer at the planter. There was no sign he’d ever been there – not even a whiff of incense remained. Maybe he’d been whisked off by a patrolling policeman – either way, the lesson’s clear:

You don’t own the content you post on Facebook or Twitter because you don’t own the platform — heck, now they’re selling your own audience back to you. Instead, you are building someone else’s business, a stark reality that led Copyblogger’s Brian Clark to coin the phrase, “digital sharecropping.”

Claim your space on the web: own the domain name on your own website. Build your audience there. Post your primary content there. Link all of the other platforms to this authority platform.

What’s  our street player inspired for your website’s next steps? Let me know in the comments below!