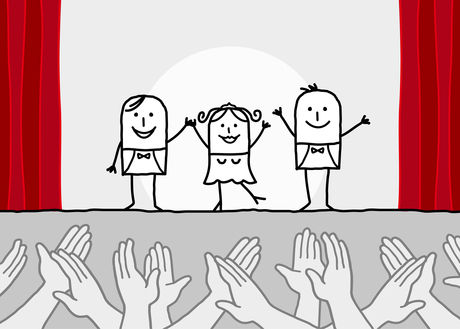 Have you ever compared yourself to others succeeding online and thought to yourself, “if I only had their stamina / wit / confidence / [insert your favorite here], maybe I’d be able to succeed, too?”

Some people seem to be naturals: for them success appears effortless, even predestined. It’s as if they’re born with something extra. They don’t seem to procrastinate, or feel socially awkward, or ever doubt themselves.

Do You Have The “Online Business Success Gene?”

It can make one wonder if success itself is based on genetic traits.

Or going into politics.

So, just for the fun of it, I took a look at people who seem to be naturally successful and came up with the “Business Success Types.”

See if you recognize any of these three “types.”

This magical person has two insanely wonderful things going for him or her: She seems to have boundless energy that never runs out, and just loves people. Others are naturally drawn to her magnetic tractor beam of energetic goodness.

She is everyone’s best friend, ever.

This Energizer Buddy has a mysterious internal energy source; arising at the crack of dawn energized by her to-do list and effortlessly leaping into the day – after of course energetically jogging two miles, energetically getting the kids off to school, and energetically handling several phone calls and emails.

What’s more, she achieves all of this before 8 a.m.; with eyes sparkling while looking fresh, tanned, rested, and naturally, eternally youthful.

Let’s see: I feel brain-dead until the first morning dose of caffeine begins seeping through the cracks of my frontal lobe.

It would appear that by these standards, in the Internet biz, I’m toast.

Maybe there’s hope with the next B.S. Type?

During the Internet’s first decade, it seemed that you had to be a geek to succeed online.

Case in point: Google geek-extraordinaire Perry Marshall. When I attended my first big, official Perry event it appeared that every person there was a master mathematician. Every one of them carried spreadsheets in their pocket, and lived and breathed Excel.

They were a foreign species. Math was my worst subject in high school. I loved English.

Nope. No hope for me here.

But, wait. There is one more Business Success Type.

The SHP enters a room and all eyes turn. It seems this Shiny Person travels with his or her own personal spotlight technician: an ethereal glow follows them like an expensive fragrance.

And success follows them as well. Everything they touch turns to their own special brand of burnished gold. Are they lucky? Blessed? Just always in the right place at the right time?

Or are they just mysteriously, magically magnetic?

With all that’s going for these Shiny Happy People, who could blame them for being so darned happy all the time?

All their Shiny Happy friends are happy.

The SHP  only hangs around other happy people, and participates in activities that maintain – or exceed – their expected level of happiness.

So, for those keeping score: Maybe you’re occasionally grouchy. Check.

Okay, so maybe there are more than three types, but the real question is this: do these people have something that you or I don’t have?

And, if we don’t have what they have, are we doomed to fail?

Have the “rest of us” lost some kind of genetic lottery? Are we doomed to failure because we don’t have just the right combination of innate B.S. Traits?

In Your Natural Habitat

The best antidote to these thoughts is to hang out with other successful people.

It was when I began partnering with a string of highly successful Energizer Buddies that I was able to observe them, in their natural habitat, up close and personal-like.

It turns out that most of them were ordinary folk, just like me. In fact, a few of them had turned to entrepreneurship because of the very issue of energy: they were burned out and exhausted by the corporate rat race, and just needed a nap.

Just try getting an afternoon nap at your typical corporate office.

Some were not naturally highly energetic at all!  But, they were successful because entrepreneurship gave them the freedom to customize their work to fit their natural traits – not because they already had some perfect set of success traits to begin with.

In fact, I discovered that many of these Shiny, Geeky, or Energetic people appeared this way to others because they had created a lifestyle and schedule for themselves that allowed them to do whatever they needed to be more successful – even taking an afternoon nap (gasp!).

So, there isn’t one success type.

As fun as this was, I hope we’ve all figured that out.

The shiny people just stand out more because they are inclined to seek the spotlight more. For every shiny person in front of the camera, there are five more who prefer working at home, quietly typing away on their blog with their list of 10,000 happy readers, and making a very good living for their family, thank you very much.

2. There is no success gene.

Every time you catch yourself looking at someone who appears to have been “predestined” for success, take a look at someone who didn’t have any breaks. This became crystal clear for me while reading the outstanding book by the rapper 50 Cent and philosopher Robert Greene, The 50th Law. Here’s a kid who grew up in the projects, surrounded by abject poverty and crime. Yet, he made it and has developed a philosophy about the whole experience of creating success from seemingly nothing.

3. There are, however, success habits and a success mindset.

I have a friend from high school who still swears – some thirty years later – that our hometown’s wealthy family proved the “success gene” hypothesis.

Having spent many summers with this family, let me reveal what this family’s success legacy was: Habits – and not natural habits, at that – but learned habits.

In a recent post, psychologist Peter Shallard recommends that rather than pretending we don’t compare ourselves to others, instead focus on comparing ourselves to better quality role models.

You’re making social comparisons whether you like it or not. It’s happening dozens of times a day. It’s time to start making these comparisons work for you. The point of this post is simply to ask: Who are you making comparisons with? Who could you be using as a more empowering yard stick for your success?

Let’s bust some more “success type” mythology! What success “types” have you observed out “in the wild?

Do you think that there are any qualities that a person must be born with in order to succeed?