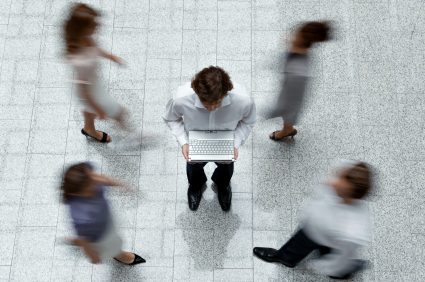 Have you ever known what to do next in your business, and still not done it?

Have you had any of those days when you doubt yourself?

Maybe you’ve even had those moments when you considered just throwing in the towel and going back to the 9-5.

For those of us who’ve been at this game for any length of time at all, these feelings are all completely natural.

As a solopreneur, what would you say is the biggest potential dream-killer?

I ask this question at the beginning of our workshops. And we get a lot of great answers:

All of these can – and do – kill the dreams of many an entrepreneur.

I have one more to add to the list. And from my experience, it’s a biggie.

In fact, it just might be the most insidious dream-killer of them all.

It comes in the form of a quote from my tattered 30-year old copy of a book that set me on my path to entrepreneurship, Wishcraft, by Barbara Sher.

She wrote; “Isolation is the dream killer.”

The Hidden Causes of Isolation

Isolation comes with the territory. Many of us work from home, alone. Gone are the social structures often provided by an office environment.

Is it enough to network? Is that all it takes?

Maybe, if it weren’t for the hidden causes of isolation lurking in the very infrastructures of our business and day-to-day activities.

The truth is that many of the things we do everyday while building our business may be contributing to our isolation. Even some of what we do that ordinarily counts as “reaching out” may just be excuses for avoiding genuine connection and real accountability.

Some say that the problem of our age is that . . . this never-ending non-stop distraction addles the brain and prevents us from being productive. Not quite.

Constant inputs and unlimited potential distractions . . . give the resistance a perfect tool. Everywhere to run, everywhere to hide.

The advantage of being cornered with nowhere to turn is that it leaves you face to face with the lizard brain, unable to stall or avoid the real work.

Ten years ago, no one was lost in this world. You had to play dungeons and dragons in a storm pipe to do that. Now there are millions and millions of us busy polishing our connections, reaching out, reacting, responding and hiding.

What happens to your productivity (and your fear) when you turn it off for a while?

What’s the Cure for Isolation?

For some people, just being around other people is enough to end their isolation: they can simply replace the camaraderie they enjoyed at the office with some other face-to-face group: their yoga classmates, weekly lunch group, any group at all.

A Meetup group is enough for these folks to get their connection fix, and then they can continue to work productively in solitude.

For others feeling the suffocation of isolation, it’s not enough to tell them “just get out there and be around people.”

Ever attended a networking event and still felt completely alone?

I know I have.

Sure, I talked to people, but other than the need some attendees had to pass out business cards, I felt no common connection there.

The big trend right now is the “solo but not alone” meme: outsource everything you don’t want to do yourself.

But having distant virtual helpers do stuff for you is no cure for isolation.

Even Forums may not be enough to really replace the rich, multi-layered interaction you have when you work WITH others.

I had one client – we’ll call her Mary – who was running a fairly successful internet-based business from her bedroom office.

She was doing all this ‘connecting’ but still not feeling connected.

In our coaching sessions, we quickly uncovered the truth: All of her virtual contact with others was impersonal and superficial. Mary had an idea or a problem, and she’d quickly drop a note in one of her forums and get a couple of responses.

But where could Mary go to really have a longer conversation about the challenges of working from home? To whom could she go to get confirmation that her ideas were even any good? Other than her coach, she wasn’t talking about long-term strategy with anyone who was invested in her or her business – someone who would hold her accountable and give her feedback within context.

Does this mean virtual contact can’t remedy our isolation?

I suggested Mary read Wishcraft, and create her own “Wishcraft Brainstorming Support” group.

I haven’t heard back yet on how she’s doing – but she loved the concept.

How can you create a Wishcraft Brainstorming Support group of your own?

In 1975, Barbara Sher was one of a number of people chosen to run an informal ‘coping group’ that was being tried out by a psychiatrist.

Rather than just sit around in a circle and talk about what troubled them, Ms. Sher tried a new approach.

A group member would express a fervent wish or goal they’d always had for their life, and the group would brainstorm ideas, solutions, and offer options for support.

Each week, the group became more hands-on, actually taking other members to appointments, and encouraging in countless ways during the week.

It was playing with this kind of group support in her workshops that encouraged Barbara Sher to write her first book.

Ms. Sher writes of her experience with this first breakthrough group:

I realized that I might have stumbled on a fantastic motivator, better than any kind of positive thinking or mantras, the kind of ongoing concern and support that a few lucky people are born with, but most of us never have. A team that makes us do what we want to do, and refuses to let us lose.

Every week, step by step, they rolled up their sleeves and put another piece in place. The combination of support and the structure and accountability of the weekly meetings created a motivational miracle.

After developing her workshops and helping countless other groups have the same experience, she writes:

Right then and there I got it: orphans don’t make it. Isolation is the dream killer. You can get what you want even if you don’t love yourself and don’t feel positive — as long as you have an ongoing team to help you think and back you up and help you over the hard spots. And what did these helpers get in return? They got the same thing.

How powerful is that?

Think about your goals, where you want your business to be in another year?

Are there others around you with similar goals? How can you help them get what they want?

How can you take your interaction with them to another level?

How can you make those meetings about more than just casual conversation – making every meeting about helping yourself and others get what you and they most want and desire in life?

It’s Time for a New Kind of Support Team

Here’s how we’re doing it here at TransformNation.

Starting next week, we’ll be inviting former and current clients who’ve been through any of our coaching programs to join us in a trial for a new support group that embraces the kinds of goals we’ve been talking about: a team of supporters who “makes us do what we want to do, and refuses to let us lose.”

For now, let’s call it “The TransformNation Roundtable,” and here’s what it looks like to us:

1. Each group member is working toward similar goals. Each member might be at different stages in business growth, but they’re all online, building a leverage business.

2. At group meetings, each member comes to the call with a goal for the month. The group helps each other really define the goals, and clarify the next steps.

3. Jon and I will not only be moderators of the group, but also group members. We will be setting goals and working our business right along with the group.

4. During the month, through the online group forum, and in emails or even phone calls, the group supports each other in meeting each member’s goals for the month.

5. The group holds each other accountable.

6. The group celebrates wins and milestones.

For now, this group will be limited to a small test group of folks who’ve already been through our coaching programs.

As a solo-worker, how do you handle the isolation?

What would be your ideal isolation-solution?